I think the reality of Black cyberfeminist1 pedagogy has been understated. Black women teachers and academics have long used the internet in innovative ways to bring intersectionality to light. Nevertheless, society generally views Blacks as technologically inept due to the digital divide.

Recently, my life has been all things Black feminism. A few weeks ago, the Critical Race Initiative (CRI) kicked off the Black Feminist Thought Series with a presentation by Dawn Dow. 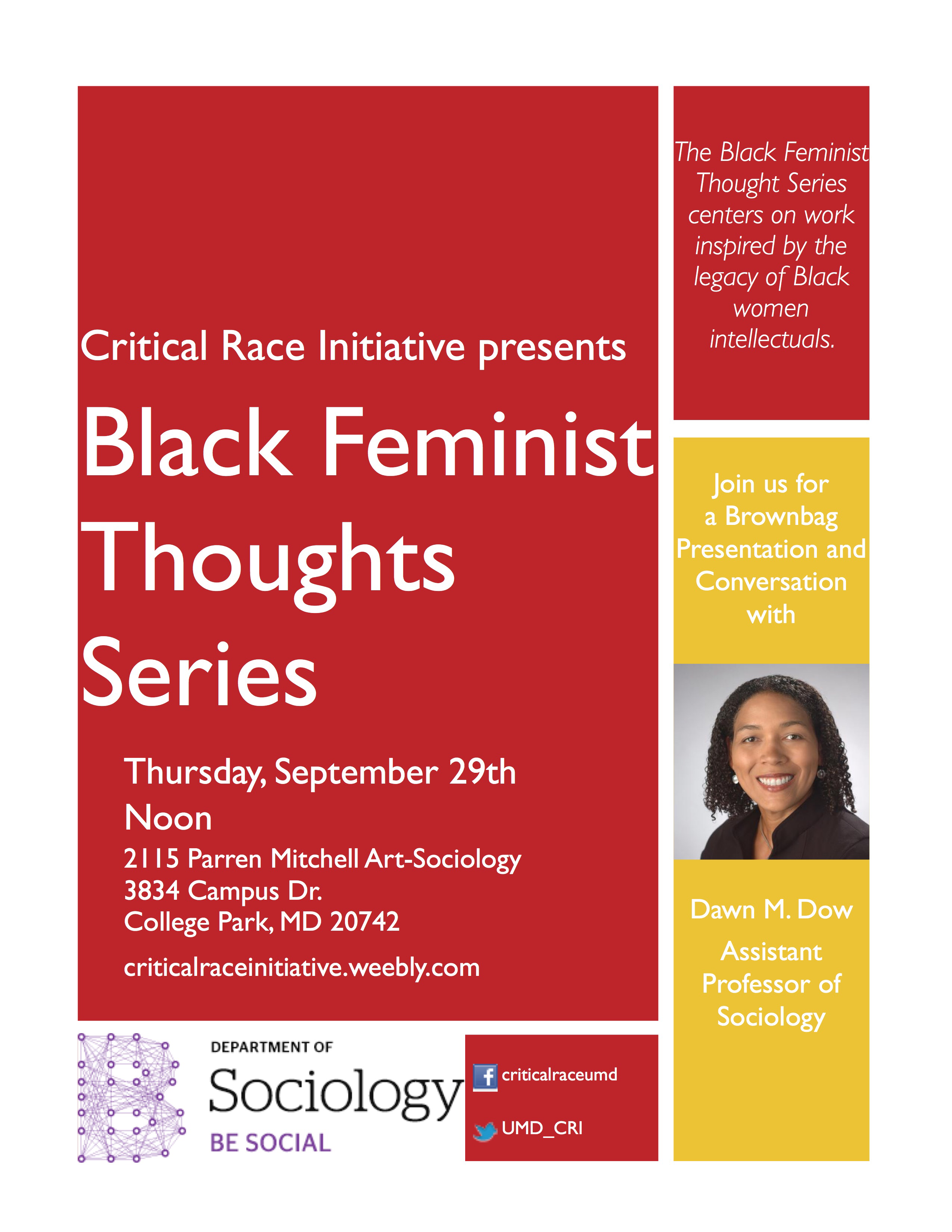 Dow uses Black feminism to theorize Black motherhood, providing insight about the dynamics of how Black women protect and manage their children’s lives. Thus, her work shatters stereotypes like the welfare queen that imply Black mothers are bad parents.

This week I attended a presentation on Black feminism held at the Maryland Institute for Technology in the Humanities (MITH) led by Dr. Catherine Knight Steele, Project Director for Synergies Among Digital Humanities and African American History and Culture. 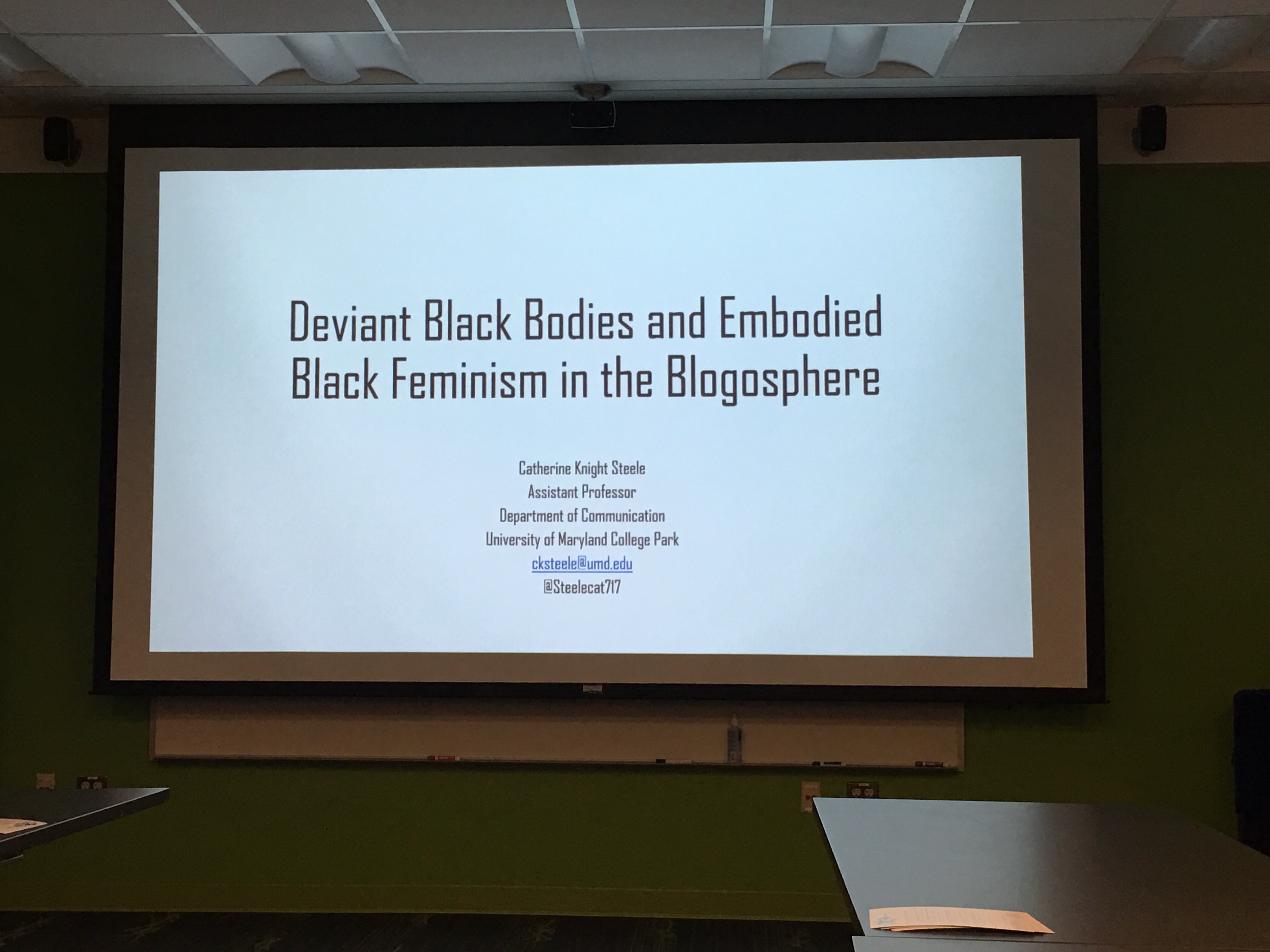 Steele analyzes critiques of Beyoncé’s Lemonade as a case study in how the blogosphere constructs and deconstructs Black women’s identities. I found Steele’s work inspiring because I think it exemplifies my research interests, bringing together Black feminism, digital technology, and of course Beyoncé! More importantly, her work emphasized the idea that Black women are agents of social change.

Later this week, I also moderated a panel on Black feminism between Dr. Patricia Hill Collinsand Dean Bonnie Thornton Dill in the Black social movements course that I am a co-instructor for. 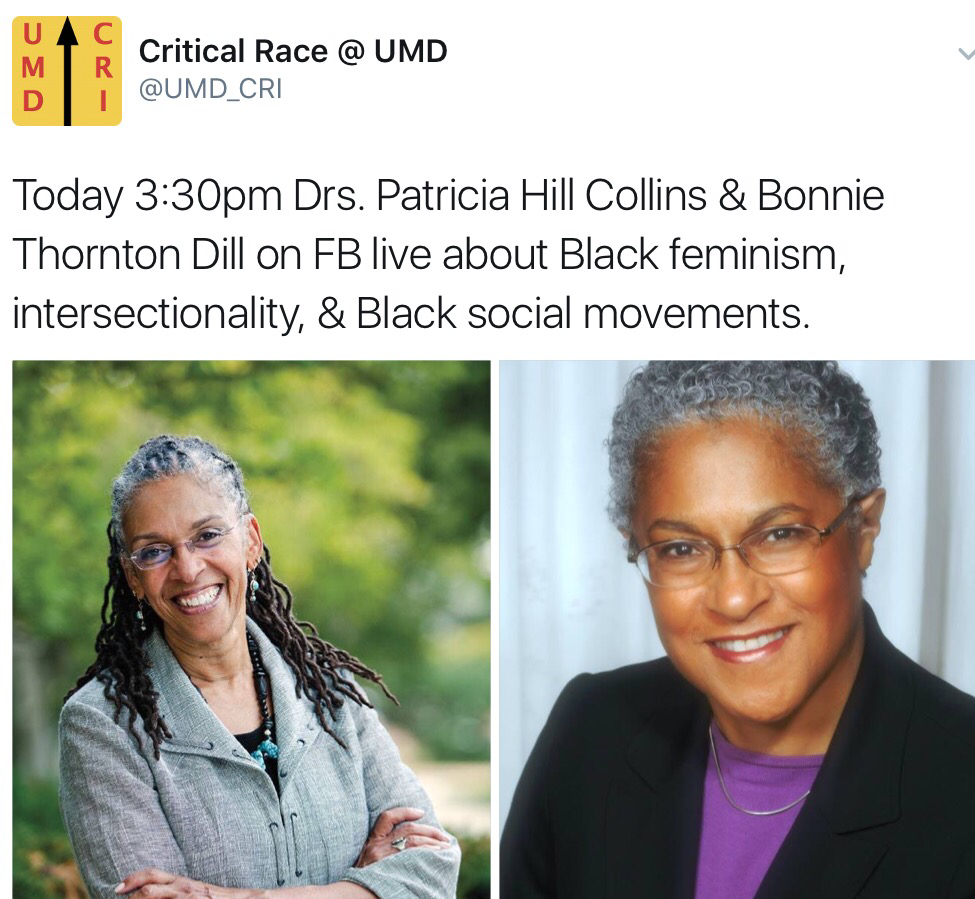 Students proposed questions using Twitter and I coded them into four broad questions:

The panelists reflected their role in forming institutional spaces for Black feminism to flourish. In addition, they expressed a belief that Black feminists could meet the challenges of today by building on the legacy of Black feminism to incorporate new tools. For instance, Black feminists today use hashtags on social media to connect with each other across the globe.

Where Do I Go From Here: Black Cyberfeminist Pedagogy

I think it’s important for me to develop a pedagogy that suits my and my students’ learning style. Furthermore, it’s important to me to conceptualize a way of teaching students beyond academia while embedded in it. I believe digital technology makes this possible and Black women academics before me have exemplified this in their own work.

I think the reality of Black cyberfeminist1 pedagogy has been understated. Black women teachers and academics have long used the internet in innovative ways to bring intersectionality to light. Nevertheless, society generally views Blacks as technologically inept due to the digital divide.

I share the sentiments Drs. Dill and Collins expressed about Black feminism being able to meet challenges using digital technology. For instance, the CRI live streamed each of these events using Facebook, inviting questions, feedback and participation from people across the United States.

The realization that people outside of my campus were interested in Black feminism led me to develop #BlackFeministLit: 30 Days of Black Feminist Thoughts as part of CRI’s ongoing series. 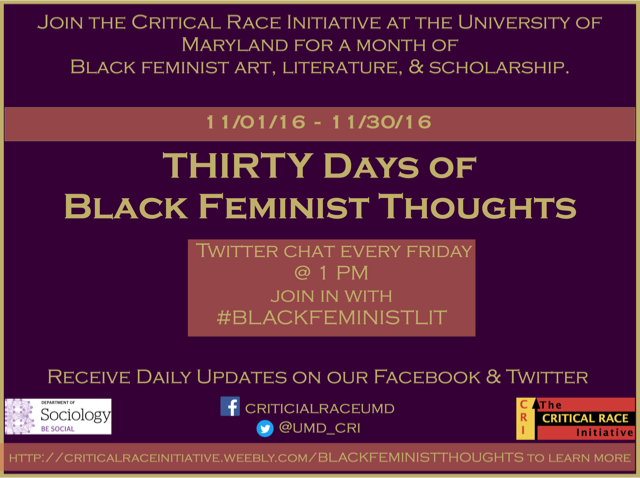 Join the Critical Race Initiative at the University of Maryland for a month of Black feminist art, literature, and scholarship from 11/01/16 to 11/30/16

Blackfeministlit will be led by Wendy Marie Laybourn and myself. So far we plan to do this in November, January, and March and will have the following themes:
– November: Black feminist foundations to Black feminist futures.
– January: Black feminist world: Postcolonial and African feminism
– March: Black and Asian feminist solidarity: Coalitian Building in Global Movements

The aim of this program is to engage in a dialogue across borders about Black feminism with our digital platforms. We hope you join in. Learn more here.